This design is to design a USART from Atmel data spec. The complete data spec can be found here.

The block diagram is shown in the following: 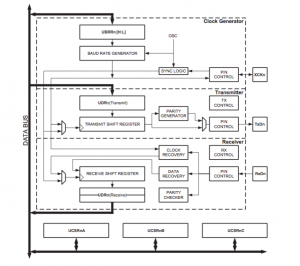 The Data transmission of transmitter and receiver is the same, and described in the following figure:

It starts with a start bit, which goes to 0. Then it follows by 5 to 9 data bits, an optional parity bit, and one or two stop bits indicating the end of the transfer.